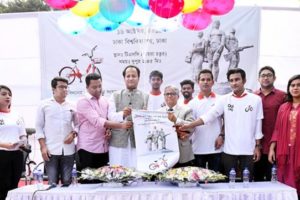 “I hope this service would be a big leap forward in making our Dhaka University campus carbon free,” he said.

“Students have to bear the expense of traveling short distance in rickshaw inside the campus. This service will reduce 70-80 per cent travel cost of the students inside the campus,” Shams told.

Jobike rolled out its service in DU on 7 October on a pilot basis. The service will be only available on the campus for students, teachers and university staff members.

Registered users can use the facility to travel from Nilkhet to Nimtali, Palashi and Shaheed Minar to Shahbagh using the service. Users will have to pay Tk 2.50 for first five minutes and Tk .40 for every next minute.

DUCSU general secretary Golam Rabbani, founder and chief executive of Jobike Mehedi Reza, DUCSU and hall representatives among others, were present at the launching ceremony.