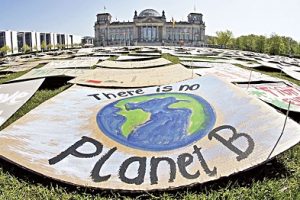 The United States marked its return to the global fight against climate change yesterday by joining high level talks on ways to better protect people and economies from the effects of global warming already taking place.

Britain said it plans to team up with Egypt, Bangladesh, Malawi, Saint Lucia and the Netherlands in an initiative that could include early warning systems for storms and investments in flood drainage and in drought-resistant crops.

This online event, hosted by the Netherlands, aims to set out practical solutions and plans for dealing with climate change in the period until 2030.

Ahead of the summit, more than 3,000 scientists from across the globe pressed leaders to better protect people from the fall out of global warming.

“Unless we step up and adapt now, the results will be increasing poverty, water shortages, agricultural losses and soaring levels of migration with an enormous toll on human life.”

Climate change could depress global food production by up to 30%, while rising seas and greater storms could force hundreds of millions in coastal cities out of their homes, summit organiser the Global Center on Adaptation (GCA) said.

According to a new assessment of the direct threat posed to humanity by climate change, almost half a million people have died in natural disasters linked to extreme weather events in the last 20 years.

The mortality burden of climate-related catastrophes such as storms, flooding and heatwaves is overwhelmingly borne by developing countries.