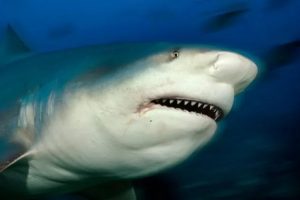 The amateur yachtsman was swimming near his moored boat off Maitre islet
in the French Pacific territory when the incident happened, according to an
initial inquiry.

“According to witnesses the man was bitten on the leg by a four-metre-long
shark” and died before the arrival of a rescue helicopter, a civil official
told AFP.

The man is believed to have died from a heart attack after the incident,
according to the newspaper Les Nouvelles-Caledoniennes.

Maitre, a roughly 20 minute trip from the main island, is popular with
tourists and was busy the weekend of the attack.

The incident took place only metres from a beach, which was evacuated by
firefighters shortly afterwards.

Authorities also banned swimming and other water-based activities along
the islet’s coastline until Monday.

Other beaches will not be closed, but authorities have called on swimmers
to be especially vigilant.

In 2019 a fisherman was killed by a bull shark in New Caledonia, days
after a boy had his leg bitten off in another shark attack.