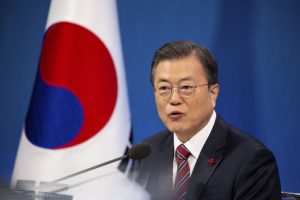 The relationship between treaty allies Seoul and Washington was at times deeply strained under Trump, who repeatedly excoriated the South for not paying enough towards the US troop presence in the country, demanding billions of dollars more.

In his first year in power, Trump raised widespread alarm in the South by engaging in personal insults and threats of war with Kim — at one point accusing the pro-engagement Moon of “appeasement”.

Biden has repeatedly spoken of the need to rebuild the United States’ global standing and declared in his inauguration speech: “We will repair our alliances and engage with the world once again.”

The centre-left Moon welcomed Biden’s swearing-in on his verified Twitter account, writing: “America is back. America’s new beginning will make democracy even greater.

“Together with the Korean people, I stand by your journey toward ‘America United’”, he added. “We go together!”

The US led the UN coalition forces that backed the South and fought North Korean and Chinese troops to a standstill in the 1950-53 Korean War, and Washington still stations around 28,500 of its forces in the South to defend it against its neighbour.

Moon seized on his hosting of the 2018 Winter Olympics to broker a dialogue between Trump and Kim that saw them hold an unprecedented summit in a blaze of publicity in Singapore.

At the time, they signed a vaguely worded statement on the denuclearisation of the Korean peninsula, but a second summit in Hanoi in early 2019 collapsed over sanctions relief and what the North would be willing to give up in return.

The process has been stalled ever since, despite a third encounter in the Demilitarized Zone that divides the peninsula.